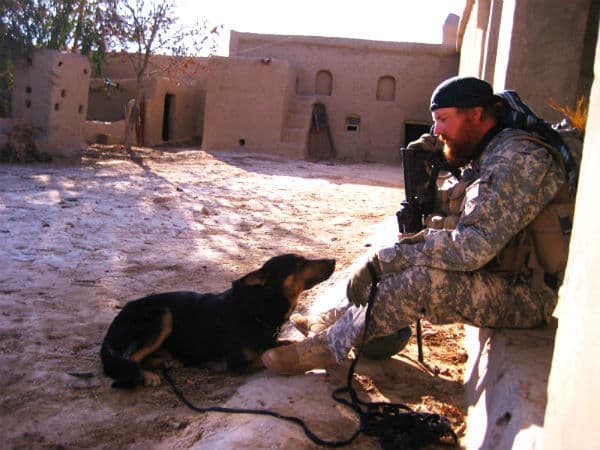 At Wasatch Hollow Animal Hospital, we recognize the immense sacrifice of our Military, Police and Fire families. We are also especially grateful for our military working dogs (MWD), our police canine, search/rescue dogs and other working dogs that work so selflessly to keep us safe.

Because we recognize this sacrifice made by both animal and handler, we have created the Balto Program. The Balto Program recognizes 2 working dogs annually and provides free medical care in order to keep them at top working order.

The Balto Program began as soon as we opened our doors in August 2015 and was initially called the Hero K-9 Program. Our very first participant was Balto and we were lucky enough to have him enrolled for almost 3 years.

Balto and his handler, John Logie, began working together in Afghanistan in 2009. The pair spent almost a year together searching for explosives and clearing the way for troops until the day Logie was injured. On May 8th, 2010, Balto saved John’s life by leading him away from a primary IED. Balto was not injured and continued working overseas without John, but they maintained a close relationship when John returned to Afghanistan. Balto was eventually retired and John instantly jumped at the opportunity to welcome him into his family.

Balto and John became an instant part of the Wasatch Hollow family and Balto was incredibly loved by the entire staff. Balto unfortunately was diagnosed with Intervertebral Disc Disease in several locations in early 2018 and after numerous treatments and attempts at maintaining quality of life, he was peacefully laid to rest in May 2018.

It was then that Dr. Howard decided to dedicate and rename our program for Balto. Balto was a part of our WHAH family and a true hero. He is sorely missed by all, but we are so grateful to have been a part of his life and to continue to serve our K-9 heros in his name.

Pet will be enrolled after consideration by Dr. Howard and/or Practice Manager and enrollment will last one year from start date (example: June 1, 2017-June 1, 2018). All decisions on enrollment are on a first come/first serve basis and will be made at our discretion.

If there is a dog that you would like to recommend for our program, please contact us now.

We use cookies on our website to give you the most relevant experience by remembering your preferences and repeat visits. By clicking “Accept All”, you consent to the use of ALL the cookies. However, you may visit "Cookie Settings" to provide a controlled consent.
Cookie SettingsAccept All
Manage consent

This website uses cookies to improve your experience while you navigate through the website. Out of these, the cookies that are categorized as necessary are stored on your browser as they are essential for the working of basic functionalities of the website. We also use third-party cookies that help us analyze and understand how you use this website. These cookies will be stored in your browser only with your consent. You also have the option to opt-out of these cookies. But opting out of some of these cookies may affect your browsing experience.
Necessary Always Enabled
Necessary cookies are absolutely essential for the website to function properly. This category only includes cookies that ensures basic functionalities and security features of the website. These cookies do not store any personal information.
Non-necessary
Any cookies that may not be particularly necessary for the website to function and is used specifically to collect user personal data via analytics, ads, other embedded contents are termed as non-necessary cookies. It is mandatory to procure user consent prior to running these cookies on your website.
SAVE & ACCEPT